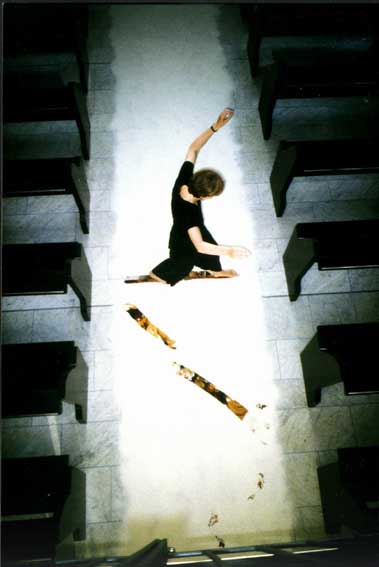 Experiment on a Baroque Picture-Floor, 1998

‘Experiment on a Baroque Picture-Floor‘ is how Eva Koethen and Bärbel Kasperek have called their artistic engagement with the figurative decoration of a pulpit in a church space. However, it is not the pulpit in the present church they engage with and invite the beholder to respond to, but an example by Balthasar Permoser created in 1710. How sensual such elevated places could be in the late Baroque! Flesh-coloured angels embracing each other – it is a fullness of life that these allegedly sexless creatures happily present the viewer. Between their bodies curves and embellishments that link, almost merge their round forms in a harmonious manner. Is that the way angels look that venerate Jesus Christ? Usually this abundance of flesh can be admired in the palace church and cathedral Sanctissimae Trinitatis on the palace square in the old town of Dresden. It is there that Eva Koethen discovered the angels and captures them on film. Now they appear on large-scale photographs. As a kind of ‘picture-carpet’ they here fill the aisles, link the entrance with the pulpit, the baptismal, the altar, and the crucifix. The viewer is subtly drawn into this dialogue as a calm performance is staged in the church. To start with, the picture-floor is invisible, covered with flour and revealing none of its expressive potential. Bärbel Kasperek, barefoot and clad in a black outfit, then gradually uncovers the picture-floor, using her feet, her hands, and ultimately her whole body. First there are only traces that can be seen, then entire scenes open up before the beholder’s eyes, and finally a whole dialogue unfolds in the church space. As certain elements are unveiled, others are again veiled, by particles of flour as well as the body of the actress. The performance ends on a positive, profane and very Protestant note: every particle of flour is carefully brushed away from the picture-floor – as if artistic practice is once not distinct from artistic performance, but an integral part of it. Would you like to have a new visual experience in your church space? Would you like to be challenged, artistically as well as religiously, such as when angels indicate the way to the cross? Then please contact one of the two artists and ask them to elaborate further, in either words or performance. I personally cannot recommend this experiment too strongly.
(Caren Beckers in KUNST INFO No. 9, AK Kirche Künste Kultur, Hanover, Germany)