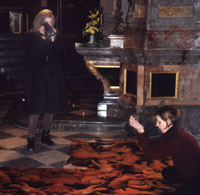 As part of the project The Unfolding of a Sculpture by Permoser over Time an experimental encounter was created in the palace church in Dresden in 2000/2001; it was initiated by the film director Sabine Barth (Dresden/Munich) and shown on Bavarian television in 2001: A photographic floor-installation was put in place in the immediate vicinity of the pulpit created by Balthasar Permoser in 1710; its layout, in the form of a cross, created an animated interior that linked visual sensations drawn from video images with those drawn from the church windows. This multi-layered interaction between architecture, sculpture, photographic and video installations further inspired the dancer Katrin Rössler (Dresden) to add to the experimental encounter by way of motion studies.