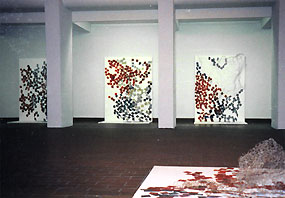 ‘Distance and Proximity’ is the theme that Eva Koethen has chosen for her exhibition. We already encounter it in this room: painted panels adorned with objects feature on the floor in the main entrance, appear from behind pillars in the side entrance – they do not only embellish walls, but hold sway over the interior of the church. What emerges is a play between bench and floor, way and obstacle, front and back, man and work of art, and, last but not least, between art and art – Koethen versus Freyer, Koethen versus Hahn, and Koethen versus Höger.

What we have the privilege to see is a kind of retrospective of works of art produced over the last twelve years. It allows us to follow the questions the artist has sought to address in this period.
Painting is action for Eva Koethen. It is a correlation that the beholder may find difficult to grasp. Strictly speaking, it is only the object that interferes between the canvas and the painter’s hand.
Already in her early work, characterised by non-representational, multi-layered spaces dominated by bright, yet cool colours, the object constituted the one constant, was perhaps focus point of the respective compositions, at the same time evidence of the closeness of everyday life. What followed was the microchip. As devices that can compress information to the highest degree possible, they stand for the abstraction, more precisely the alienation of the object. Indeed, it is only by way of the photograph that the object can return, albeit in aesthetic form. The later examples have a twofold significance: on the one hand, they have a direct link to everyday life; on the other hand, they most likely have been used to the limit and hence signify uselessness. Seen otherwise, they embody expectation. I believe that Eva Koethen’s encounter with Japan and that of Zen, in particular, has coined her art. Japanese culture has taught her to distinguish between vita contemplativa and vita active and to maintain contemplation and action – contrary to Western culture – as two separate poles: hence the title – ‘It can only be found in transition …’ – of the catalogue accompanying her 1991 exhibition.
‘Why show what only wants to reveal itself at a later point?’ – There has to be enough time for encounters, for objects to meet the canvas, for the ego of the contemplating artist, the hand ready to paint. This does not happen without standstills: ‘When I no longer paint, no longer love this action, when I lose in momentum, no longer control the paint, but start to fiddle with the pigments’, the artist confesses, ‘then the process of painting comes to a standstill.’ On the other hand: ‘Each step other than calculated action, which follows a linear path and leads to nothing, is worth a feast. Let us celebrate these – in distance and proximity.
(Excerpts from the opening speech by Manfred Richter, Art Service of Berlin Cathedral)