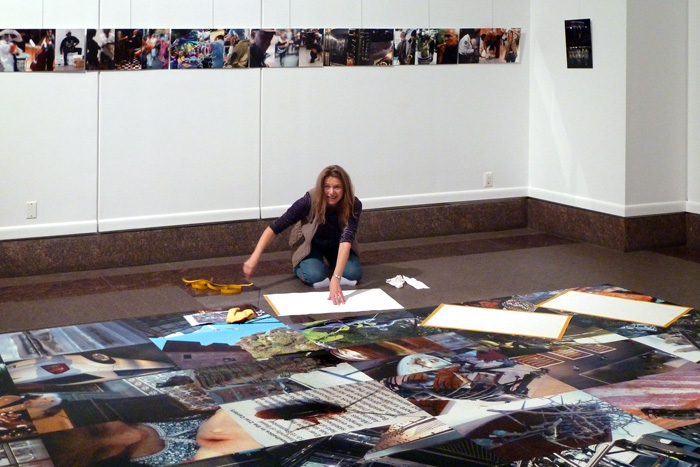 The Creation of New Spaces of Perception

The installation features photos not only on the walls, but on the floor as well, creating a uniquely interactive space. The pictures on show in this new exhibition were mainly taken in New York and Berlin and capture the diverse art forms and broad range of lifestyles characteristic of the two cities. The photographs reveal lines of cultural tradition as well as spaces of global design.
Installed at the feet of the beholder, the pictures are not only to be viewed, but also to be walked on and across – in real as well as metaphorical terms. This experience evokes a highly tactile relationship between the beholder and the rooms and things, which are recognizable, but, in their respective constellations, also largely alienated. Fragmented and unfamiliar, as drawn from different cultural contexts and historical periods, the images reveal aesthetic figurations and rhythms, which allow for new patterns of interaction and surprising interpretations.
Interaction with the picture spaces is further heightened by the possibility to view the entire ensemble from the mezzanine, providing an impressive contrast to the experience of viewing the images at very close range under one’s feet.